Transporting Yourself Back to Indonesian Taste despite Closed Borders

Being unable to spend your holiday in Indonesia due to the pandemic, a visit to “Indies city” The Hague might appease your longing for traveling to Indonesia and its delicious cuisine.

In an attempt to curb the spread of the coronavirus, Indonesia has closed its borders to foreign tourists since April this year. This policy has caused a sharp drop in the number of foreign tourists visiting popular destinations in Indonesia, such as Bali. To help revive the hard-hit tourism industry, the governor of Bali had long maintained that the island would start welcoming international visitors again on September 11 this year. But this plan has been postponed until at least 2021 over concerns about Indonesia’s mounting COVID-19 cases.

For around 215.000 Dutch people who would normally spend their holiday break in Indonesia, the country’s closed borders feel like a great loss.

“I love to spend my holiday exploring Indonesia’s stunning nature, interacting with the friendly people, and enjoying the delicious food. But due to the pandemic, this only remains something I can dream of since my travel plans got cancelled,” as the 56-year-old Ria Geurtsen explains. She had planned to go on a holiday to Indonesia last March. But being a district nurse, the Dutch government strongly advised her to sacrifice her trip for the sake of her much needed hands in the healthcare sector. Ria rescheduled her trip to May, but then Indonesia had already closed its borders.

However, closed borders do not necessarily mean that you cannot transport yourself back to Indonesian sense, especially in terms of its food culture. In no other country outside Indonesia the Indonesian food culture is so alive as in the Netherlands. Although Indonesian restaurants are spread across the country, The Hague could be the absolute culinary alternative to your holiday in Indonesia. This Dutch city has long commercial, cultural, and culinary ties with the former Dutch Indies, which is now known as Indonesia.

The culinary ties between The Hague and Indonesia thus originate from colonial times. “Besides the presence of the Ministry of Colonies, many (state-owned) Dutch companies that operated in the Dutch Indies also had an office in The Hague. Traders in colonial products, such as sugar, coffee, and tea, settled in the city as well. Many people from the Dutch Indies thus spent their leave in The Hague and hotels anticipated with offering some dishes from the Indies cuisine,” as explained by Leslie Boon, heritage officer for the Tong Tong Foundation and programmer at the Tong Tong Fair, the biggest Eurasian fair in the world held annually in The Hague.

In the aftermath of World War II and the independence of the former Dutch Indies, around 250.000 people migrated from Indonesia to the Netherlands. Around 60.000 of them settled in The Hague, contributing to The Hague’s nickname as “Indies capital of the world.” “Many among these people chose The Hague due to the Indies facilities that had established prior to World War II, such as restaurants, shops, and associations. Or because they were already familiar with The Hague due to previous family visits,” Leslie explains.

The Indies culture in The Hague is among others reflected in architecture, e.g. the Indies neighborhood and arts such as music (Indorock) and literature. “The Indonesian Embassy in The Hague and the Sekolah Indonesia (Indonesian School) also exemplify the ties with Indonesia,” Leslie adds.

But another heritage of the East can be experienced through the food culture. The Hague has more Indonesian restaurants and small toko (shop) than any other Dutch city, serving you the most delicious nasi goreng (fried rice), soto ayam (chicken soup), or lemper (glutinous rice roll filled with chicken, fish, or meat floss). Many among these restaurants also serve a fusion of cooking techniques and ingredients of both worlds, the Indonesian and the Dutch, with the rijsttafel as the most widely known example of a Dutch invention with Indonesian food involved.

The taste of Indonesia in The Hague: “Rames vegetaris,” a very recommended dish at Warung Bude Kati (left) and a bottle of Bintang, an Indonesian beer, at Balihuisje (right)/Lotte Troost

“The food is not only delicious but also an indispensable part of the Indies culture,” Leslie explains. It is thus not surprising that the Indies/Indonesian food court forms one of the three most important pillars of the Tong Tong Festival so that visitors can imagine themselves being in Asia.

Dutch restaurant guide Eet.nu lists 61 Indonesian restaurants in The Hague. Most of these are located in the city center and in the neighborhoods around Segbroek, a part of The Hague that is traditionally home to many Dutch Indies people. Although Indonesian food has become an integral part of The Hague’s culinary scenery, do not expect Indonesian prices. An Indonesian meal will generally cost you around €15, seven times more than you would pay in Indonesia.

Indonesia is the most diverse culinary heritage, consisting of separate regional cuisines that all embrace their own cooking style, flavors, and spices. Are those who thus want to make a culinary tour around the different Indonesian regions also able to indulge themselves in The Hague? The answer is yes. Sumatran food can be found among others at “Salero Minang,” Javanese food at “The Javaan,” food from Sulawesi at “Tri Tunggal,” and you can transport yourself back to Balinese vibes at “The Balihuisje.” Whereas vegetarians should pay a visit to the “Vegetarische Toko,” Dutch Prime Minister Mark Rutte favors eating gado-gado (salad with eggs and peanut sauce) and perkedèl (fried patties) at Toko Soeboer.

With these options in mind and the Indonesian food culture being so alive and so easily available in The Hague, we have perhaps enough food for thought until Indonesian borders will open again to foreign tourists. 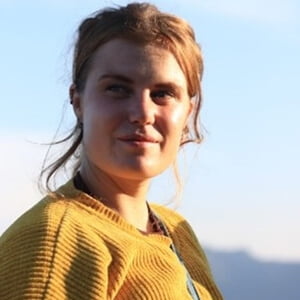 Lotte Troost graduated from the University of Amsterdam in Contemporary Asian Studies. Currently resides in The Hague, she lived alternately in Balikpapan, Bandung, and Yogyakarta for studies and research. Lotte has a genuine passion for the Indonesian language and culture.

This author does not have any more posts.

Lotte Troost graduated from the University of Amsterdam in Contemporary Asian Studies. Currently resides in The Hague, she lived alternately in Balikpapan, Bandung, and Yogyakarta for studies and research. Lotte has a genuine passion for the Indonesian language and culture.